One Role, 2 Oscar Journeys: Inside Joaquin Phoenix’s and Heath Ledger’s Approaches to Joker 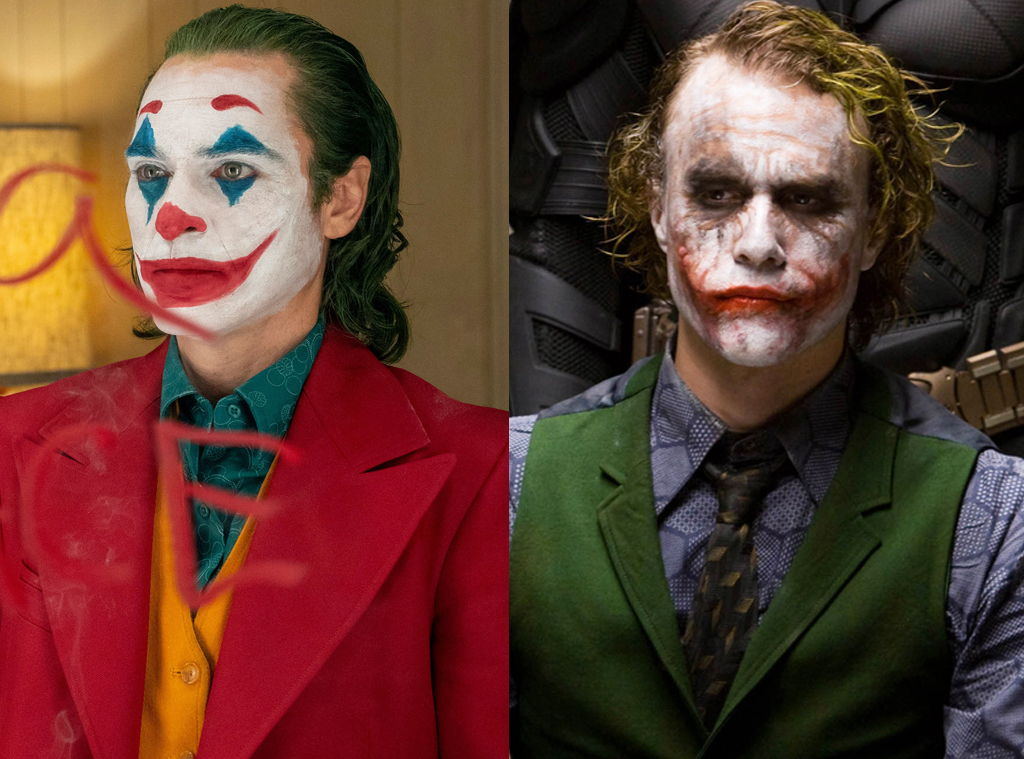 When Joaquin Phoenix won the SAG Award for his performance in Joker, he said he was standing on the shoulders of his “favorite actor” Heath Ledger.

The moment was a touching one. Ledger had also received accolades for his portrayal of Gotham’s famous villain, including a posthumous Oscar in the Best Actor in a Supporting Role category following his 2008 death.

Now, Phoenix is going for Oscar gold in the Best Actor in a Leading Role category. If he wins, he and Ledger will have won two separate Academy Awards for playing one iconic character.

This wouldn’t be the first time this has happened. Marlon Brando and Robert De Niro also took home trophies for their portrayals of Vito Corleone in The Godfather and The Godfather Part II. Still, it would be a rarity.

Despite these parallels, Phoenix’s Joker differed greatly from Ledger’s, and each actor managed to make the controversial character his very own.

When Ledger signed on to play the Joker in the 2008 film The Dark Knight, he wasn’t the first one to take on the role. Cesar Romero, Jack Nicholson and Mark Hamill had all played Batman’s nemesis. However, the filmmakers wanted this Joker to be different: They wanted him to feel scarier.

“Our Joker—Heath’s interpretation of the Joker—has always been the absolute extreme of anarchy and chaos, effectively,” director Christopher Nolan told Empire Magazine in 2007. “He’s pure evil through pure anarchy. And what makes him terrifying is to not humanize him in narrative terms. Heath found all kinds of fantastic ways to humanize him in terms of simply being real and being a real person, but in narrative terms we didn’t want to humanize him, we didn’t want to show his origins, show what made him do the things he’s doing because then he becomes less threatening.”

Because this Joker didn’t have a definite origin story—or a real name, for that matter—Ledger and Nolan could really shape the character’s persona. They drew inspiration from Sid Vicious and Alex in A Clockwork Orange. Ledger also spent a month secluded in a London hotel room, where he kept a diary and experimented with voices.

“I ended up landing more in the realm of a psychopath—someone with very little to no conscience towards his acts,” Ledger told Empire Magazine in 2007. “He’s just an absolute sociopath, a cold-blooded, mass-murdering clown, and Chris has given me free rein. Which is fun, because there are no real boundaries to what the Joker would say or do. Nothing intimidates him, and everything is a big joke.” 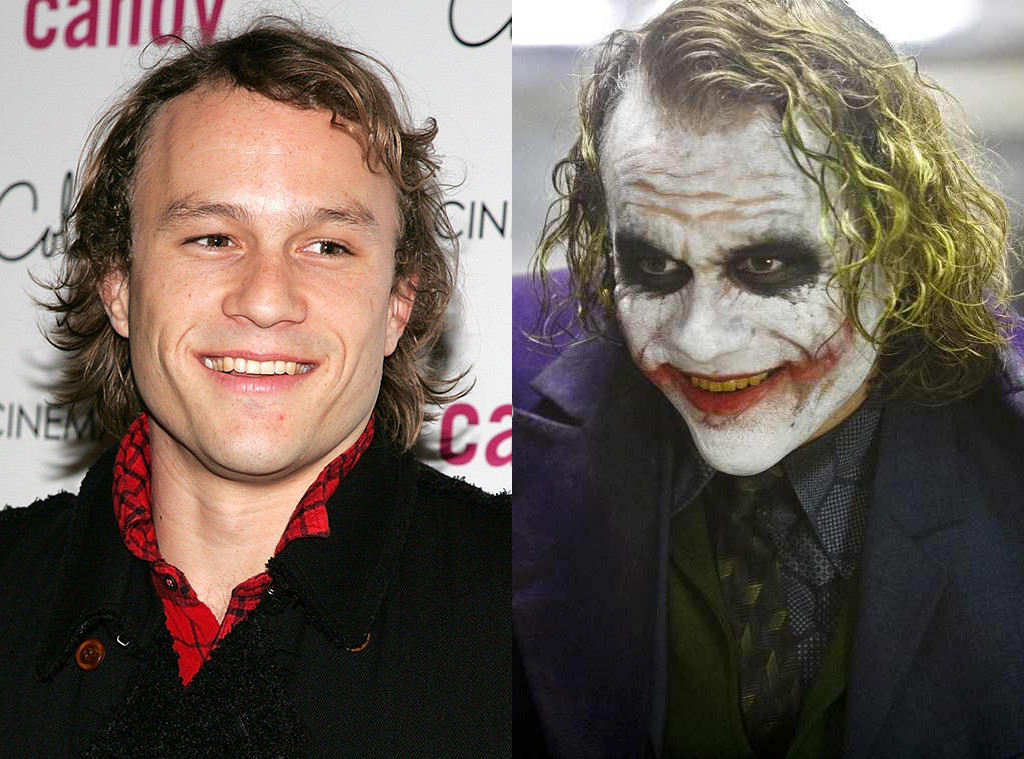 The diary Ledger mentioned was filled with scribbles and photographs, which served as inspiration for the Joker’s identity. As for the Joker’s voice, Nolan told author Joseph McCabe it was “extraordinarily unpredictable”—much like the Joker himself.

These weren’t the only parts of the transformation. There was also the formation of the Joker’s famous mask.

“There’s something about the metaphor to work behind a mask and from within a mask [that] always gives you the license to do whatever you want or the freedom, free of feeling like you’re being judged or viewed,” Ledger told FHM in 2007. “And so I’m literally wearing a mask now, which empowers me twice as much to kind of feel free and feel unrestrained here and it’s pretty exciting.”

Ledger told Empire Magazine it took about an hour and a half to do the makeup, including his scars and his mouth. In fact, in McCabe’s book, 100 Things Batman Fans Should Know & Do Before They Die, Nolan recalled how the prosthetic covering Ledger’s lower lip would become unglued. So, Ledger would lick his lips to move it back into place. Eventually, this lip licking just became a part of the Joker’s mannerisms.

“It was an exhausting process,” Ledger told MTV in 2007, per Observer. “I actually had quite a bit of time off between scenes—weeks sometimes. But it was required because whenever I was working, it exhausted me to the bone. At the end of the day, I couldn’t move. I couldn’t talk. I was absolutely wrecked. If I had to do that every day, I couldn’t have done what I did. The schedule really permitted me to exhaust myself.”

Despite his exhaustion, Ledger struggled with sleep. During a chat with Interview Magazine, Michelle Williams, who welcomed daughter Matilda with Ledger in 2005 before their 2007 breakup, looked back at his “uncontrollable energy” and “bouts with insomnia.”

According to The New York Times, Ledger took medication, like Ambien, to help him sleep. 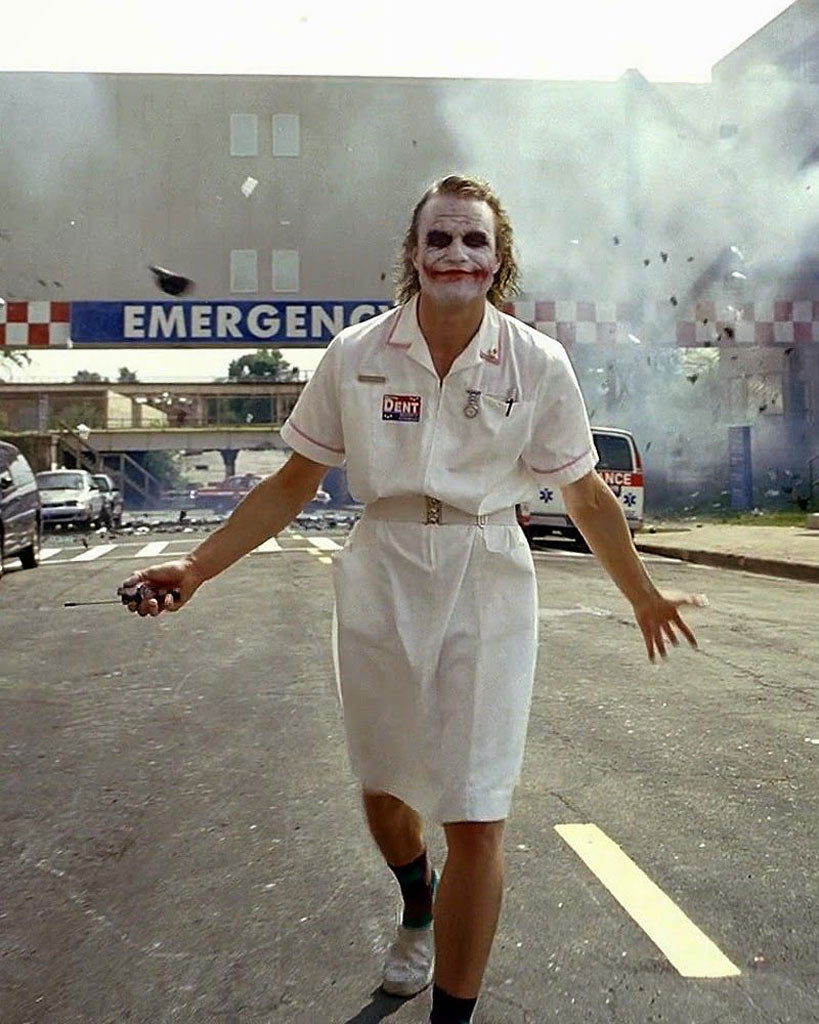 In January 2008, Ledger died from an accidental overdose of prescription drugs, including painkillers, anti-anxiety medication and sleep aids.

“Mr. Heath Ledger died as the result of acute intoxication by the combined effects of oxycodone, hydrocodone, diazepam, temazepam, alprazolam and doxylamine,” New York Medical Examiner’s Office spokesperson Ellen Borakove said after his death. “We have concluded that the manner of death is accident, resulting from the abuse of prescription medications.”

While his father, Kim, said “no medications were taken in excess,” the family learned it was a “combination of doctor-prescribed drugs” that “proved lethal for our boy.”

Some wondered if the Joker was to blame for Ledger’s death, suspecting that the actor couldn’t shake off the persona. However, Ledger’s sister Kate told USA Today “it was actually the exact opposite” and that “there was no doom and gloom.” 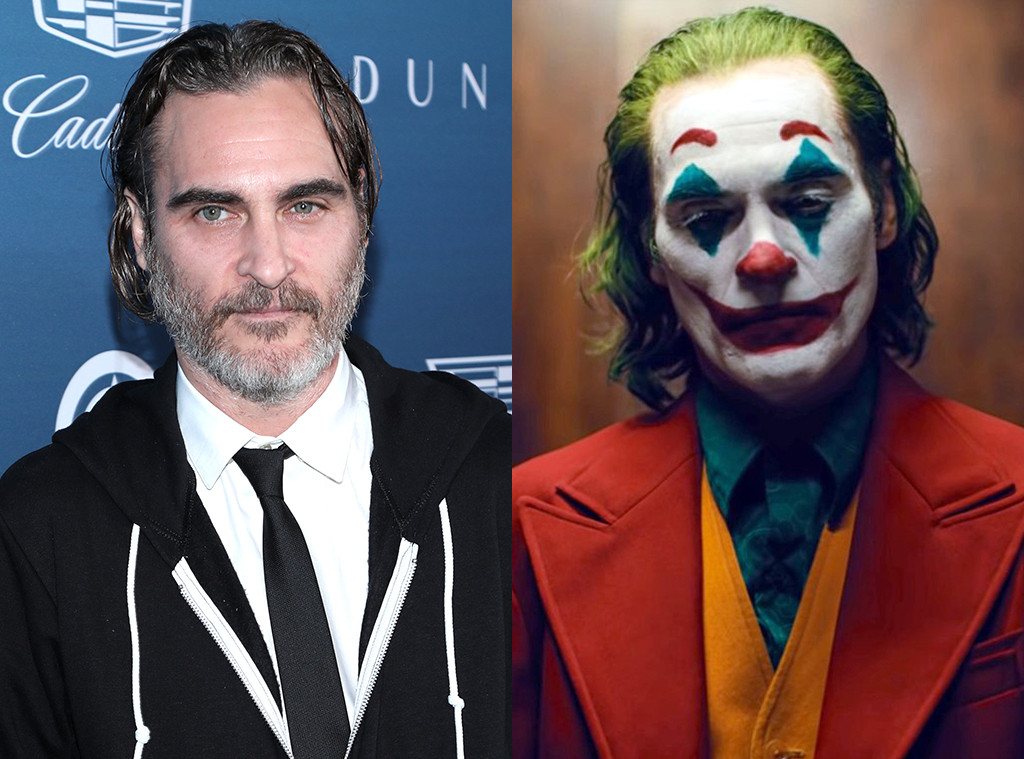 While Ledger’s Joker had no backstory, Phoenix’s Joker was all about the backstory. In fact, he spent most of the film playing the man behind the mask—Arthur Fleck.

The movie follows Arthur’s transformation into the Joker and, depending on how viewers interpret the film, what got him there.

Like Ledger and Nolan, Phoenix and director Todd Phillips wanted a different kind of Joker. And while Phoenix was familiar with past portrayals, he didn’t want to focus on the comic and film versions he had seen before.

“For me, I didn’t refer to any past iterations of the character,” Phoenix said at the 2019 Venice Film Festival. “It was just something that felt like it was our creation in some ways.”

They also wanted this Joker to feel more realistic.

“Everything we’ve come to know about Joker over the last [however] many years we’ve seen him in comic books and movies—how do you take that and run it through a real lens?” Phillips asked Fred Film Radio. “OK, well, he didn’t fall into a vat of acid. That wouldn’t turn you white and dye your hair green. Why is his hair green, and why is his face white, and why does he have a laugh? So, it was like a backwards engineering in a way.”

As a result, Phoenix and Phillips sought out inspiration from the real world versus just the DC world.

According to Vanity Fair, Phoenix researched narcissism and criminology. He also read a book about the personalities of political assassins.

Phoenix underwent a physical transformation, too. He reportedly lost 52 pounds after reading about the side effects of the medications Arthur may have taken. While Phoenix never revealed a diagnosis for Arthur, he told Peter Travers he started looking at the script “through the lens of trauma.”

“I recognized, from previous work that I’d done and previous research, that he was exhibiting the signs of PTSD,” Phoenix said on Popcorn With Peter Travers. “He goes into freeze mode when he gets attacked. So, I know that is the result of childhood trauma.”

Still, Phoenix suggested the decision to not label Arthur was a conscious one.

“I did identify Arthur as a particular personality, a particular type,” he said at the 2019 Venice Film Festival. “But then I also wanted the freedom to create something that wasn’t identifiable. I mean, this is a fictional character. I didn’t want a psychiatrist to be able to identify the kind of person that he was.”

This wasn’t Phoenix’s only preparation. He also invited Phillips to his house to audition the laugh after getting the part. In addition, he kept a journal to help discover the character and practiced applying the Joker’s makeup.

Movement was another essential component. During his interview with Travers, Phoenix said the weight loss caused him to be aware of his body in ways he never had been before and to move in ways he hadn’t anticipated. According to Vanity Fair, Phoenix also studied the movements of Buster Keaton and Ray Bolger, the latter of whom played the Scarecrow in The Wizard of Oz and performed a routine to “Old Soft Shoe” that significantly impacted the Joker’s now-famous dance moves. While Phoenix also worked with a choreographer, some of his steps were completely improvised. 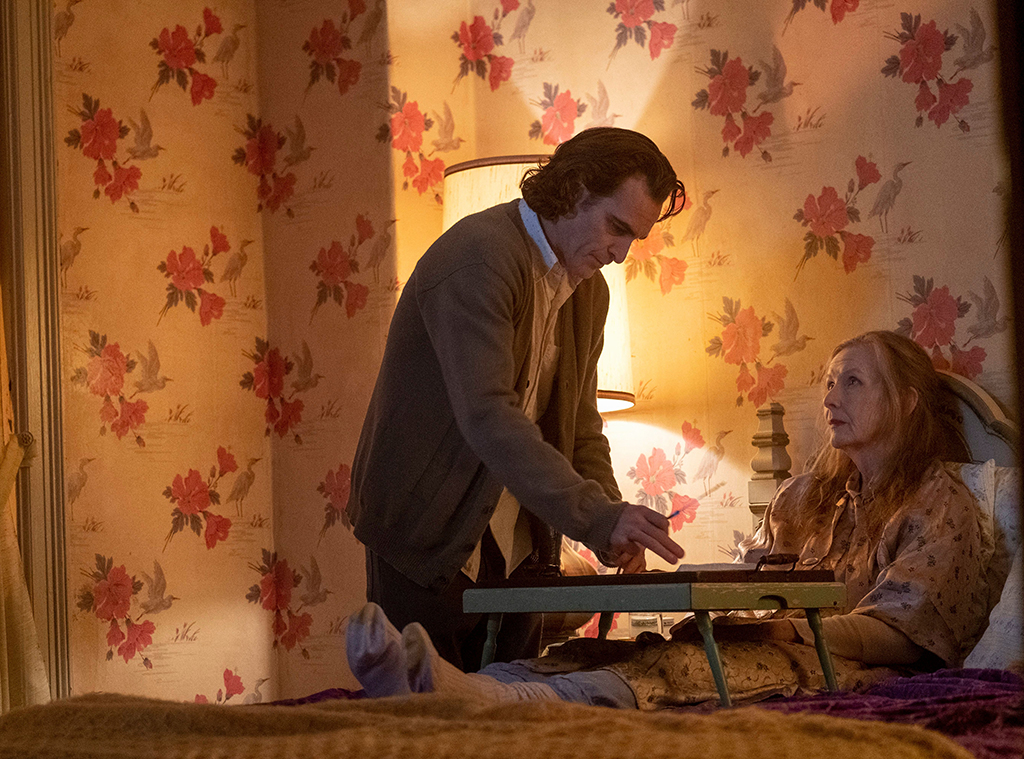 The Joker raised a lot of questions, too—including those about empathy (or the lack thereof it) in the world. Could viewers really feel for someone who had turned into a villain? Even Phoenix admitted he felt torn by the character.

“There are times I really felt for him, and then there were times where I was disappointed and repulsed by his behavior,” he told Anderson Cooper for 60 Minutes. “I liked that.”

Phillips told Fred Film Radio people start out loving and rooting for Arthur “until they can’t root for him any longer.” However, he said Arthur didn’t intend to watch the world burn. He just started as a man “searching for identity.”

“He thought he was put here on this Earth to make people laugh and bring joy to the world,” Phillips said. “He made a few bad decisions along the way, but no, his goal was not [to watch the world burn]. I think he became a mistaken leader, so to speak, or a symbol.”

Phillips even described Arthur’s life as a combination of comedy and tragedy. Arthur’s laugh, for instance, was a source of pain; yet, he was a clown-for-hire and an aspiring comedian.

The discussion about empathy wasn’t the only topic up for debate. The character also brought up discussions about violence and how it was portrayed in the film.

However, Warner Bros. made it clear “neither the fictional character Joker nor the film, is an endorsement of real-world violence of any kind” and that “it is not the intention of the film, the filmmakers or the studio to hold this character up as a hero.”

Needless to say, people view the Joker in different ways, and every actor brings a different perspective to the character. So, audiences may never fully understand the Joker. But then again, perhaps that’s how it’s meant to be: Part of the man will always remain hidden behind the mask.