Some animals are so adapted to underground caverns that they have lost their coloration and eyesight while gaining strange new adaptations for their life in perpetual darkness. These organisms are known as troglobites. Many of them are so rare that we still know very little about their habits. 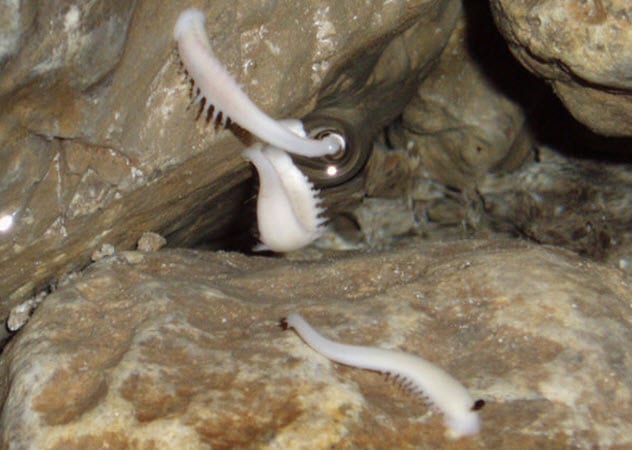 Found exclusively in Croatia’s Mt. Velebit, Croatobranchus mestrovi is a bizarre species of leech that inhabits pools of icy cold water that collect at the bottom of deep shafts. Completely white, these leeches possess unique leglike growths along their sides and five short fingerlike tentacles surrounding their mouth. The functions of these tentacles aren’t fully understood, nor do we know much else about this animal’s lifestyle.

Leeches are most famous for feeding on blood, while other species prey on snails and worms or feed on rotten detritus. What this species feeds upon is completely unknown as few other living things have been observed in the same watery pools. 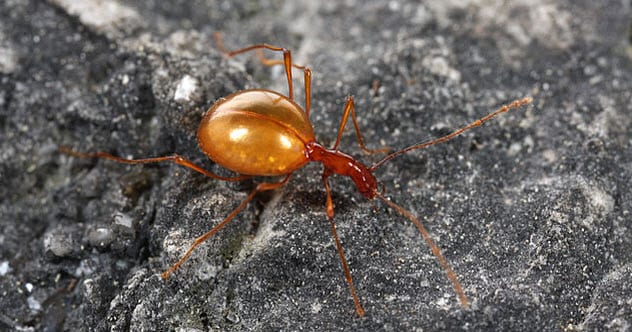 Surprisingly, it wasn’t that long ago that science knew virtually nothing of cave life. Some scientists even believed that no living species could survive exclusively in cave ecosystems and assumed that most creatures encountered there had wandered in from outside.

This all changed when a single beetle named Leptodirus hochenwartii was formally described in 1831. The recognition of this pale, blind, long-necked scavenger as a creature adapted completely to cave life sparked the beginning of speleobiology — the study of cave ecosystems — as its own scientific discipline. 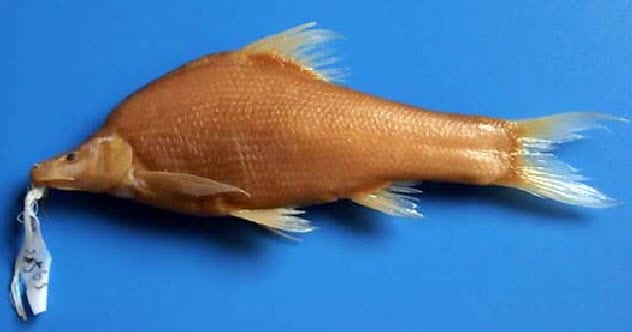 Sinocyclocheilus is a mouthful of a Latin name that translates to “crossed-fork back.” This description perhaps neglects the most startling feature of this genus, a skull that almost appears to be “sunken in” or “collapsed.”

Some species in this genus are fully sighted surface fish, some are semisubterranean with tiny, weak eyes, and others are true troglobites, completely blind and devoid of pigment. This has made the group a valuable evolutionary research subject, demonstrating how fish trapped underground can quickly adapt into troglobitic forms. 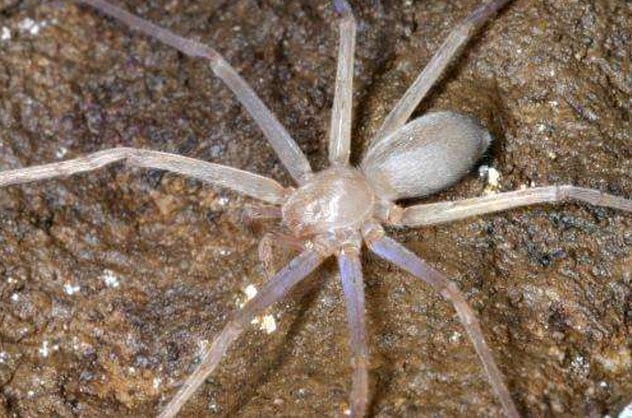 Though a number of spiders are known to live in caves, no truly troglobitic hunting spiders — like wolf spiders — were discovered until 2012. At that time, the new species Sinopodia scurion was found in a cave in Laos.

The pale, transparent scurion is the only completely eyeless species out of over 1,000 known huntsman spiders. Like the barbel fishes, this species has several cousins who still possess eyes — from a single weak pair to the more typical eight eyes of those that live nearer cave entrances or in the great outdoors.

Munidopsis polymorpha isn’t technically a “crab” but a crablike “squat lobster” found exclusively in a single lava tube under the Canary Islands, which is actually the single longest lava tube ever discovered. Uniquely, the crabs feed entirely on microscopic, photosynthetic diatoms, which require sunlight to grow.

The crab’s entire supply of diatoms is fed by sunlight trickling through only two openings in the cave ceiling. The blind crustaceans graze in the shadows just beyond these sunny wells. Polymorpha is also another of those animals first discovered as a fossil and thus believed to have been long extinct until its rediscovery. 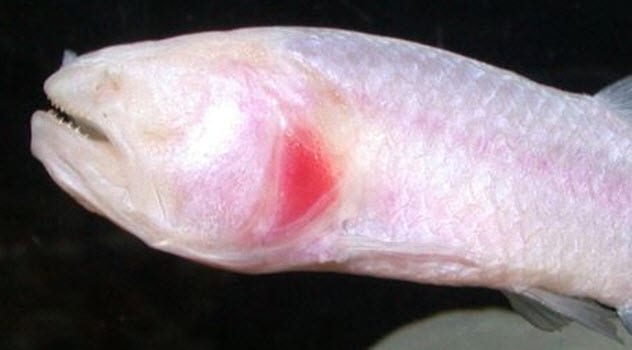 Stygichthys typhlops may be one of the fiercest-looking troglobitic fish with its large head and sharp-toothed underbite. As a species of tetra, it does share some evolutionary ancestry with the infamous piranha.

A single specimen of this fish was retrieved from a well in Brazil in the 1960s. When no more specimens were found for over 50 years, it was thought that they might be extinct. It wasn’t until 2010 that several more specimens were retrieved, though they may now be threatened by declining water levels in the subterranean aquifers they call home. 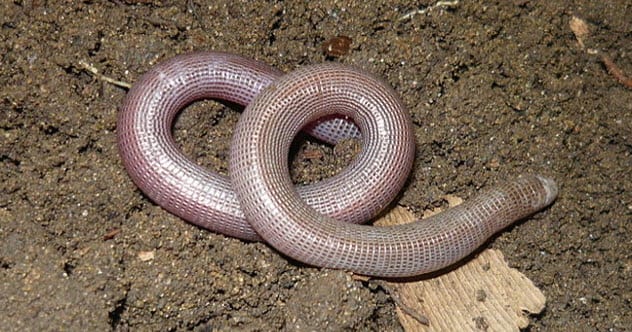 Amphisbaena caeca is the only animal on our list that doesn’t actually live in caves. But it does spend so much of its life underground that it has adapted in some similar ways.

Lacking pigment, its translucent body appears pinkish and earthworm-like. Its tiny eyes are embedded invisibly under its skin and are only capable of differentiating light from dark. These completely legless reptiles are found primarily in Puerto Rico and feed mostly on termites or the soft eggs and larvae of ants. 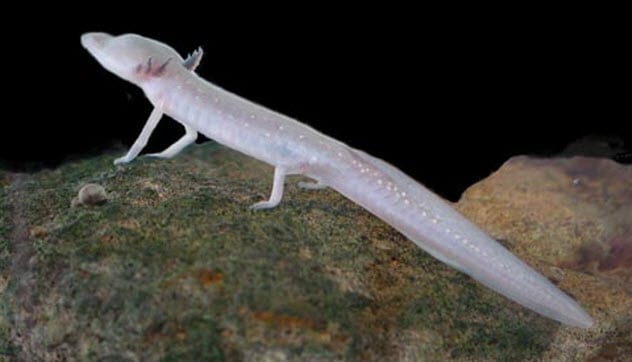 We’ve spoken before about the olm, one famous species of troglobitic amphibian. But other species of salamander have adapted to the underground world, including two species in Texas.

The eyeless Eurycea rathbuni is the more specialized and more common of the two, although it is still a rare creature dependent upon water from a single major aquifer. Rarer is Eurycea waterlooensis, which possesses tiny eyes and is observed only in water-filled pockets deep below the floor of Barton Springs in Austin.

Like the olm, the axolotl, and a few other salamanders, these animals exhibit neoteny, retaining their larval gills into adulthood. 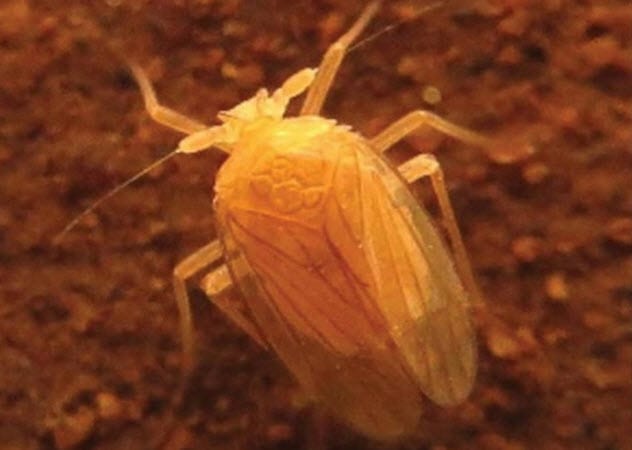 For a long time, it was believed that tropical ecosystems didn’t usually support caves with endemic fauna at all. In fact, almost no troglobites were known from Australia until the 1980s when Bayliss Cave was found to possess an incredible diversity of troglobitic insects, arachnids, millipedes, and other invertebrates.

Among the most surprising of these were troglobitic planthoppers, which are insects related to cicadas and common around the world in grasslands and forests. You wouldn’t expect such a plant-dependent insect to adapt completely to cave life, but these tiny creatures thrive on the juices they suck from plants and tree roots that have penetrated into their sunless home. 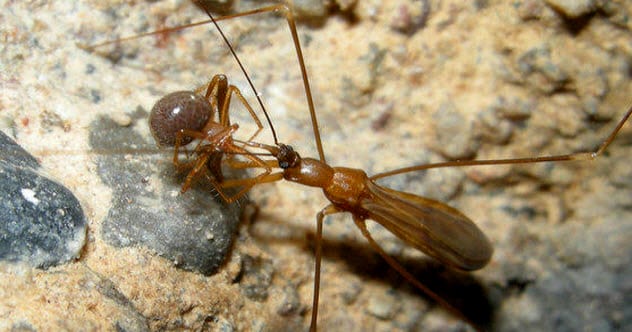 Phasmatocoris labyrinthicus is the only creature on our list with fairly decent eyesight, which it needs to presumably take flight and travel to entirely new caves in search of a mate. As a species of true bug — the order Hemiptera — its mouthparts are fused into a single beaklike straw, which it uses to inject paralyzing venom into its prey and suck out their liquefied innards.

This elusive insect will eat almost anything it can catch. But it feeds primarily on spiders and has specialized bristles on its front legs for plucking at spiders’ webs. Remarkably, adult labyrinth bugs have also been observed grabbing onto old, abandoned spiderwebs and pulling them taut, perhaps “taking over” the empty webs for their own use.